I titled this piece "Under Siege" because with the exception of one subspecies of African white rhinoceros, all five rhinoceros species in the world are in danger of being hunted by poachers for their horns, and three of the species are listed as critically endangered. In keeping with the theme of the title I overlaid the image of the rhino with a design I took from Palestinian embroidery. The background is a modified Islamic geometric pattern with rhino horns for the border.


This is the first piece I've stitched on fabric rather than paper. To get the design on the fabric I used a transfer pencil to trace from a xerox collage. It was then ironed (in reverse) onto the fabric, with the border added later. Because the process is new for me, with such a complicated design and relatively large size -13"x17"- it was a challenge, and it took me a lot longer to make than I was expecting!

Below are the images I referenced including the xerox collage. The Palestinian embroidery design is from the book "Embroidery from Palestine" by Shelagh Weir. 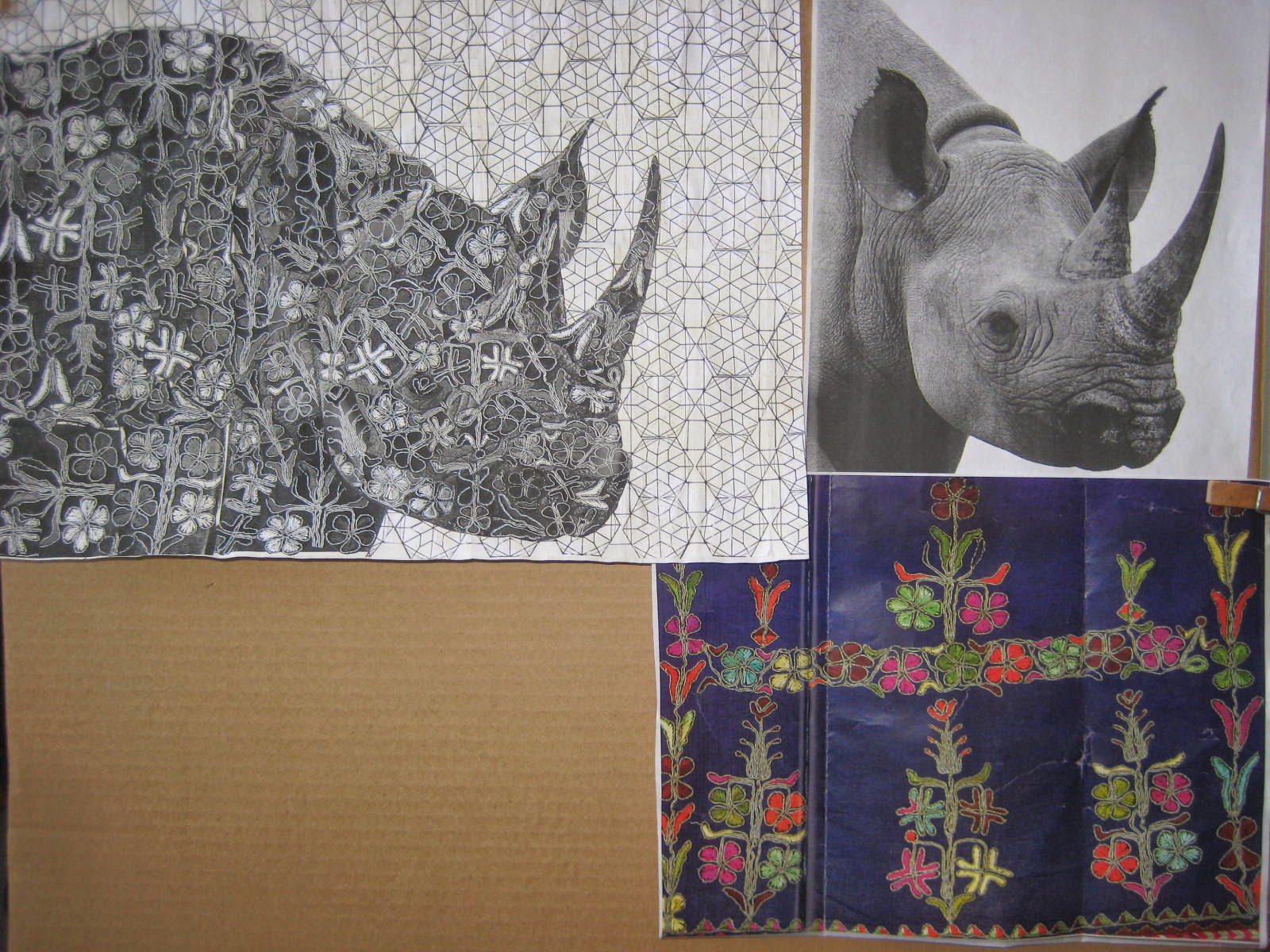 Martha Shade
Martha Shade is a mixed-media artist whose unconventional stitchworks and sculptures blend global mythology with personal memory and contemporary social issues. Born in Colorado, Shade studied printmaking at University of Arizona and ceramics at Louisiana State University. After a move to the Pacific Northwest, her early art career found her showcasing ceramic and paper-pulp sculptures at MIA Gallery, Bellevue Art Museum, Bumbershoot, and more. Shade’s style evolved to explore increasingly elaborate ways to finish the surfaces of her sculptural work, leading her through glass mosaic toward new explorations in paper, beading and stitchwork.  While living in Taos, New Mexico and later Portland, Oregon, she exhibited in shows including most notably “Women Artists from the Land of Enchantment”, co-curated by Lucy Lippard and “Originals 2005″, a group show at the Museum of Fine Arts in Santa Fe. Since returning to Seattle, Shade has been exhibiting her work at ArtXchange Gallery. In their 2015 “Mythos” exhibition, Shade’s work was pictured  in the Seattle Times and highlighted by Michael Upchurch as “gentle, eccentric and exquisitely crafted.” Shade is represented by ArtXchange Gallery.