Animals From The Past

I was looking at Chinese Tang Dynasty horses. This piece was conceived when the US was having "debates" about whether to invade Iraq. I put quotes around debate because the whole thing was so obviously manipulated--the "weapons of mass destruction" or any 911 connection.
The "bomb-blossom" on the horse represented the moment before the deadly decision was made: how the bomb could instead be a blossom of awareness, could of turned into something else.
It's weight is carried by an animal that represents beauty and intuition. 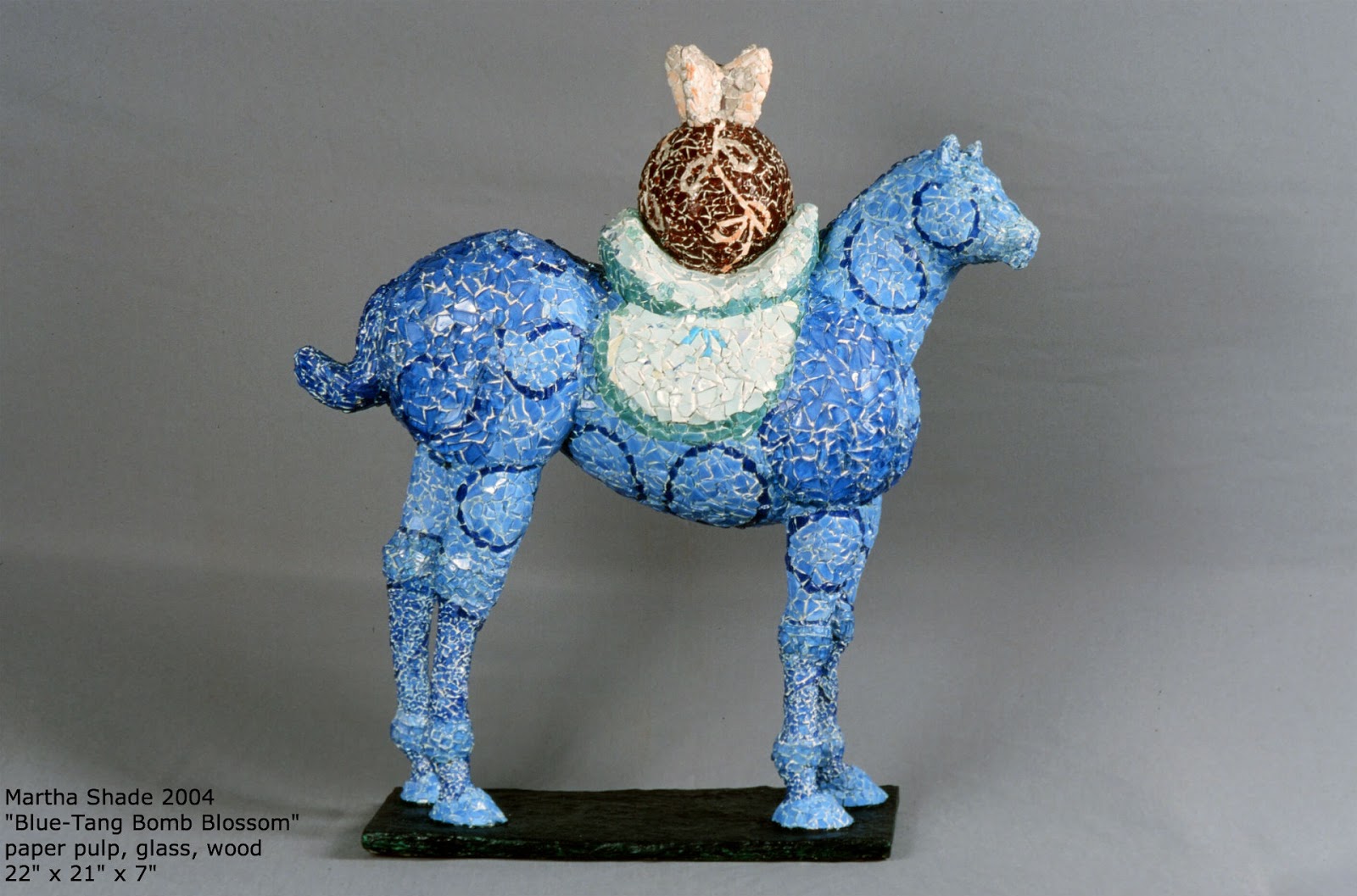 
I unexpectedly saw the footage, by Thomas Edison, of his execution of the elephant Topsy in 1903. It was such a profoundly disturbing and evil act, and I made this piece in homage to Topsy.

Thomas Edison was attempting to prove the dangers of AC current, and after the elephant had killed three trainers- including one who tried to feed her a lit cigarette- Edison was happy to electrocute her to help prove his point.

I subsequently learned that he also electrocuted dogs and cats as well as cows and horses. How many school children are taught this? We learn about the great inventor and his genius, another hero of American ingenuity. We are told to be proud.

Suppressing the 'dark side' of Edison is an example of how National Identity itself is mythologized, conveniently omitting what is destructive and abusive. Then it becomes possible to project that dark side onto "the other".

Martha Shade
Martha Shade is a mixed-media artist whose unconventional stitchworks and sculptures blend global mythology with personal memory and contemporary social issues. Born in Colorado, Shade studied printmaking at University of Arizona and ceramics at Louisiana State University. After a move to the Pacific Northwest, her early art career found her showcasing ceramic and paper-pulp sculptures at MIA Gallery, Bellevue Art Museum, Bumbershoot, and more. Shade’s style evolved to explore increasingly elaborate ways to finish the surfaces of her sculptural work, leading her through glass mosaic toward new explorations in paper, beading and stitchwork.  While living in Taos, New Mexico and later Portland, Oregon, she exhibited in shows including most notably “Women Artists from the Land of Enchantment”, co-curated by Lucy Lippard and “Originals 2005″, a group show at the Museum of Fine Arts in Santa Fe. Since returning to Seattle, Shade has been exhibiting her work at ArtXchange Gallery. In their 2015 “Mythos” exhibition, Shade’s work was pictured  in the Seattle Times and highlighted by Michael Upchurch as “gentle, eccentric and exquisitely crafted.” Shade is represented by ArtXchange Gallery.